Holloway Cut Advisor (HCA) is a web-based honeypot collecting personal information under a diamond evaluating system’s guise. The HCA is designed to spy on consumers and channel potential buyers to affiliated dealers. 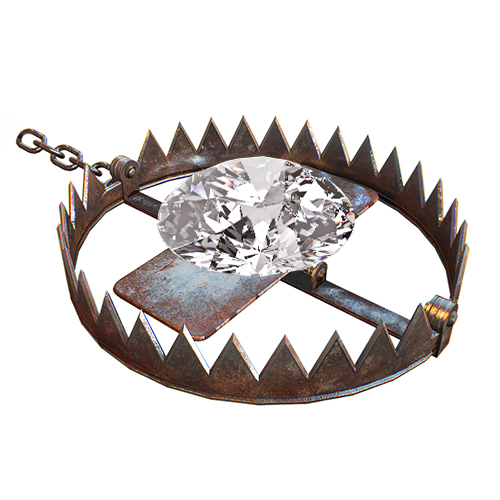 Like the two swindlers in “The Emperor’s New Clothes,” the HCA plays on people’s pride and intellectual vanity by selling a “diamond score” that no one can see.

The imposters, in this case, are the Australian diamond broker and his Russian sidekick. Garry Ian Holloway and Sergey Sivovolenko worked out a scam to substitute the established diamond grading system with their cockamamie scheme. One is a self-proclaimed diamond guru; the other is a crackpot operative of notorious Russian tech start-up Octonus Software.

Hans Christian Andersen’s tale goes like this: “Two con-artists posing as weavers offer to supply the emperor with magnificent clothes invisible to stupid or incompetent people. When the new cloak is finished, they mime dressing the emperor, and he sets off in a procession before the townsfolk. The people go along with the pretense, so they are not labeled stupid. Until a child yells: “The emperor has no clothes!” no one is willing to state the obvious.”

They acquired the US patent 7,251,619 for “a computer-implemented system for gem evaluation, and assessment of a diamond appearance based upon the determined values of attributes contributing to the visual appeal and the established rating value.”

Sounds like a load of BS? You bet it is!

Not surprisingly, the HCA calculator is hosted by Pricescope. The Pricescope, for those not familiar with this notorious troll farm, is a public forum used by a closely-knit group of diamond and gem dealers to promote their interests.

The HCA creators say they can rate a diamond’s “visual appeal” using a proprietary system. Despite their claim, the HCA is neither groundbreaking nor independent or unbiased. It has no scientific base. HCA is a trap for anal-retentives who think they can outsmart the system. 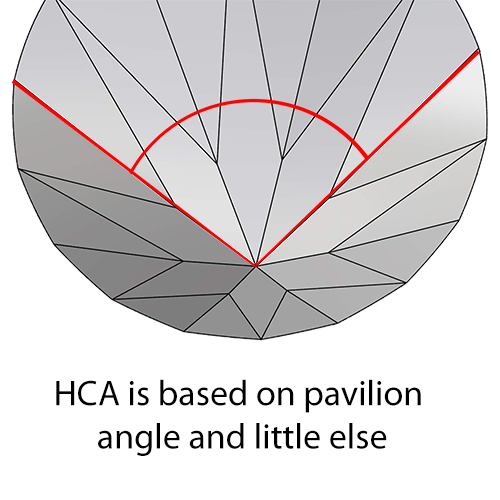 All ideal cut diamonds look exactly the same; a regular person cannot tell them apart. The subtle differences do not make one superior to another. They are equally beautiful. The Holloway Cut Adviser (HCA) is billed as a diamond-cut calculator. It takes a diamond’s metrics such as total depth, table size, and crown angle. The diamond’s pavilion angle determines 90% of the score.

The calculator also requires a diamond’s weight, measurements, and certificate number. This additional information is collected purely for marketing purposes and is not used in the calculation.

Diamonds are scored on a scale from 0 to 10 — the lower the number, the higher the score. Yet, the highest score is not zero but 1.0. Anything less than 1 is also undesirable. The calculator is currently limited to three calculations free of charge; after that, it demands payment.