Is fluorescence good or bad?

Why do diamonds glow?

Up to 35% of all diamonds in the world emit a glow when subjected to ultraviolet light. This glow is called fluorescence.

When we refer to stone’s fluorescence, we mean medium to very strong fluorescence. Faint fluorescence is not considered detrimental to the diamond’s value. 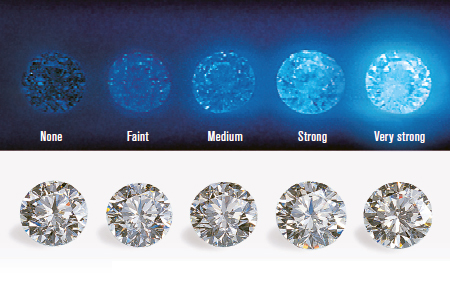 A fluorescent stone is the cashmere sweater with the red dot of the diamond world – the regret lingers long after the joy of getting a bargain is forgotten.

Fluorescence is an ability of a diamond to emit a glow when subjected to ultraviolet light, just like Fido’s stains do. According to GIA research, up to 35% of all diamonds in the world fluoresce. Fluorescence intensity depends on the UV light strength and ambiance lighting. Disco lighting, fluorescent bulbs, and natural sunlight all have a UV component that triggers the glow.

According to GIA, fewer than 0.2% of the fluorescent diamonds are “hazy or oily” due to the fluorescence, so that phenomenon is infrequent. The fluorescence grade “Negligible” used by AGS (but who cares what AGS calls it, GIA is the gold standard) is the same as “None” by GIA. It refers to diamonds that refuse to glow under the blacklight.

Is there any good reason to buy a fluorescent stone?

Strong blue fluorescence is thought to enhance a diamond’s appearance in the I to K color range, but this is highly debatable. Because diamonds with strong fluorescence are sold at a steep discount, even crystal-clear ones, you get a bargain.

Buy a fluorescent stone when:

In countries like Vietnam, Malaysia, and Indonesia, near colorless to faint yellow diamonds with fluorescence are more desirable.