There are two distinct techniques for making jewelry. One is forging by hand, and the other – called casting – is pouring liquid metal into a mold. There are four levels of jewelry craftsmanship based on the type of manufacturing process used in its creation. 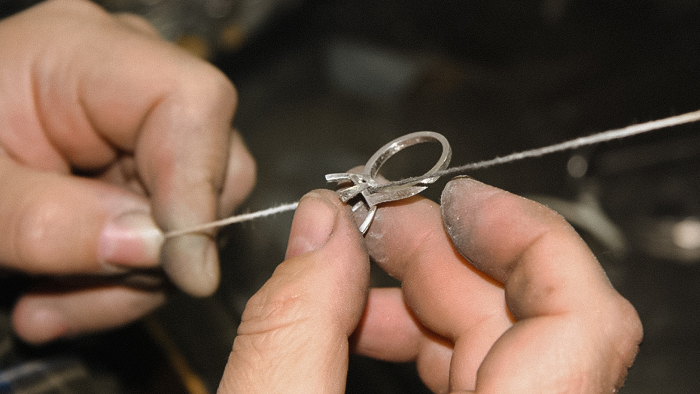 1. Hand-forged jewelry offers the highest grade of jewelry craftsmanship. Just like selvage jeans or bespoke suits, the hand-forged pieces are the most desirable and sought-after.

Hand-forged jewelry is made without any use of casting, using only traditional bench tools.

2. The production of fine jewelry involves casting and finishing various elements of a piece separately and then assembling. Parts can be cast one by one or in small batches.

Pave seats are not cast, they are drilled and the pave beads are raised by hand. Very few pieces sold at luxury retailers are made using this technology. The rest is commercial production (see 3)

3. Commercial jewelry is manufactured in higher volumes, sometimes hundreds of pieces at a time. Each piece is cast as two parts at most to minimize time and cost. The finish and fit are lackluster at best. Most jewelry in the world is produced this way.

4. Low-end mass production. One-piece casting. The surface of the cast piece is mechanically stripped and polished.

Lost wax casting is a thousand years old technology used since prehistoric times. Some types of jewelry work are done better using casting: for example, any piece of jewelry with easy-to-reach surfaces, such as a gypsy ring.

Carving a solid piece like that from a massive chunk of metal would be wasteful and inefficient. On the other hand, casting a lattice-like ring imitating wire work is unacceptable, because it is nearly impossible to preserve the wire profile while cleaning the casting. 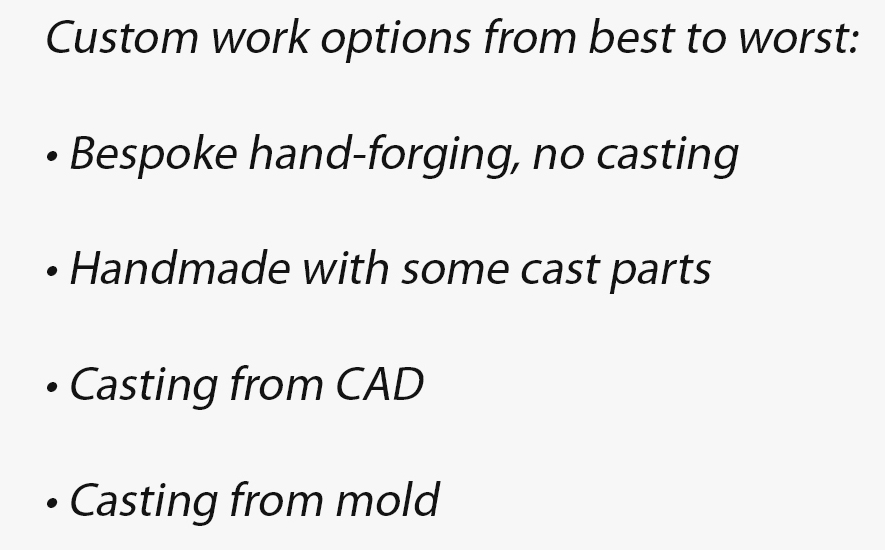 Making jewelry by casting is cheaper and faster, but the casting process results in a distorted piece with rough, porous skin.

All surfaces have to be manually stripped and reshaped. Hard-to-reach spots are left untouched with coarse, jagged casting lines that are impossible to clean.

Cast pieces are replicas; they do not have the clarity and finesse of the master model.

A typical cast part has a porous, wrinkled surface, a distorted shape, cavities, and porosity. In the follow-up process of finishing and polishing, the piece loses clarity of details, leaving the jeweler with a part that is vastly inferior to the master model.

There are several methods of producing a wax model for casting, such as carving a piece of wax by hand or using a rubber mold to replicate the master model.

Carving by hand requires a talented, skilled model maker taking a long time to produce just one wax. Using rubber molds is cheap; it yields a large volume of identical waxes in a mostly automated process.

Printing a model using a 3D printer is a popular method of producing a wax model for casting. The process is called CAD/CAM (computer-assisted design/computer-assisted modeling), CAD for short.

Instead of using rubber molds, the technology allows the wax to be printed from a file. CAD files are rarely designed from scratch, they are assembled from a library of templates.

CAD is often touted as an alternative to custom work. However, in reality, it is an uninspired shortcut for jewelers incapable of hand fabrication. 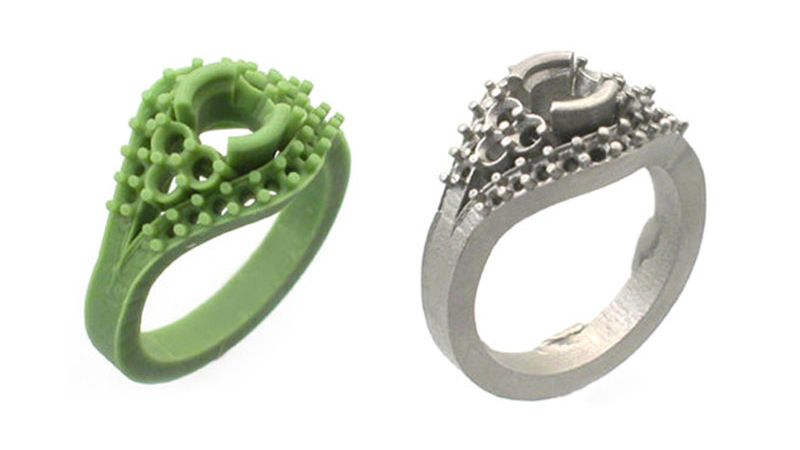 A CAD-produced ring compared to a hand-forged ring is what a photograph is to a hand-painted masterpiece.

After a piece is cast, it’s still dull, spongy, buckled, and unable to achieve the elegance and luster of a hand-forged piece.
Once finished, the casting looks nothing like the crisp, virtual image you saw on the computer screen.

Real professional jewelers use bench tools – not a keyboard – to make jewelry. CAD files are typically generated by graphic designers with a very limited understanding of jewelry. Most of them never made a piece of jewelry with their own hands.

Jewelry pieces produced in large quantities by casting. Each piece is the exact replica of the master model. Replication is fast and cheap, allowing factories to manufacture thousands of pieces at a time with minimal use of skilled labor.

In the past, the custom pieces were only those made by hand by master jewelers and model-makers. Now CAD production is routinely referred to as custom-made, despite the fact the pieces are cast. The current definition of “custom” is a piece that was sold before it was made.

Just like the term “custom”, “made-to-order” implies higher quality and better craftsmanship. “Made-to-order” just sounds better; it has an aura of exclusivity but is pretty much the same thing.

An all-encompassing term hinting at a superior level of craftsmanship without delivering on its promise.

By definition, any piece of jewelry is handmade (even low-end production) as long as it was touched by a human hand at some point in production. The vague implication of individual attention amounts to nothing more than hype.

The term makes it clear that the piece was forged, not cast. In general, hand-forging produces superior quality and finish, but it depends on the skills of the individual jeweler. Some hand-forged pieces are crude and primitive.

Traditionally, bench made jewelry is produced one piece at a time. Bench made pieces are made by a group of artisans who often work from a bench, using only hand tools.

A piece of jewelry made to fit an individual stone is strictly bespoke. The bespoke jewelry is hand-forged on the bench out of a solid piece of metal without any machine intervention or casting.

This is the top tier of craftsmanship, not to mention the esteem of wearing a piece of art created by an accomplished artisan.

The gross disregard of symmetry and lack of refinement is often professed to be intended, rather than an indication of poor bench skills. The handcrafted bespoke jewelry is synonymous with quality and the highest level of detail.